Aside from It’s-It ice cream sandwiches, if there’s one dessert that is inextricably linked with San Francisco, it has to be the coffee crunch cake from the late, great bakery-soda fountain chain, Blum’s. 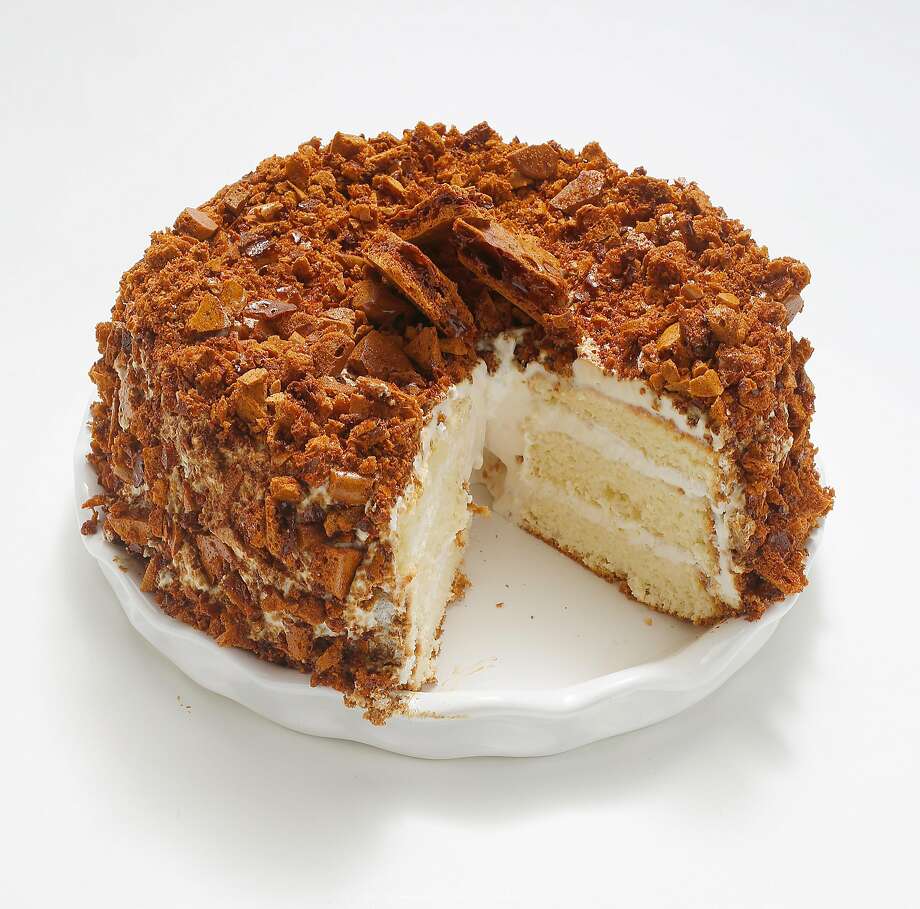 To make the cake: Adjust rack in lower third of oven; preheat oven to 350 degrees.

Sift flour, ¾ cup sugar and the salt onto a sheet of wax paper; set aside.

Using an electric mixer, beat egg yolks with ¼ cup sugar until thick and pale yellow. Add ¼ cup water and beat until thickened, about 4 minutes. Set aside.

Using a metal spatula, scoop up a third of the flour mixture and sprinkle over mixture; fold in with a rubber spatula. Repeat two more times just until ingredients are incorporated. Gently pour batter into an ungreased 10-inch round tube pan with removable bottom (such as an angel food pan). Level top with a rubber spatula. Bake for 50 to 55 minutes, or until top springs back slightly when lightly touched. Invert pan over a long-necked bottle to cool for about 45 minutes.

To remove cake from pan, slip a flexible metal spatula down one side of pan; slowly trace perimeter to release the cake. When sides are free, push up on bottom to release cake. Tilt cake, with removable bottom still attached, and gently tap bottom against counter to loosen cake. Rotate cake, tapping a few more times, until it appears free. Cover cake with a rack, and invert; remove bottom of pan.

To make the coffee crunch: Generously oil a large baking sheet; sift baking soda onto a sheet of wax paper; set nearby. Combine coffee, sugar and corn syrup in a heavy, 4-quart saucepan. Place over medium-low heat, stirring occasionally, until sugar dissolves. When mixture is clear and begins to boil, increase heat to medium-high; cook until mixture reaches 290 degrees on a candy thermometer. Toward the end of cooking ( 270 to 280 degrees), stir occasionally to prevent mixture from scorching and becoming too foamy). Remove from heat and stir in baking soda (mixture will foam up fiercely). While still foaming, pour out onto oiled baking sheet. Do not spread; let cool undisturbed for at least 1 hour.

Crush into very small pieces. (Place between 2 sheets of wax paper and tap or roll with rolling pin.) Store in an airtight container.

To make the frosting: Combine cream, sugar and vanilla in a heavy-duty mixer; beat on high speed until cream holds soft peaks.

Just before serving, generously sprinkle top and sides with the coffee crunch.