Health Canada’s strategy to get some of the salt out of processed foods has produced a reduction in sodium “much lower than anticipated,” an agency report released Monday says.

Forty-eight per cent of the categories of processed foods in the agency’s evaluation did not make any progress toward sodium reduction.

In some of the foods, the sodium levels actually increased from the baseline. The offenders included pie dough and shells, tortillas and wraps, dry mashed or scalloped potatoes, and dairy-free cheese and spreads.

Only 14 per cent of the food categories met the final Phase III target for reducing sodium.

Health Canada came up with industry guidelines in June 2012, with a goal to reducing Canadians’ average sodium intake to 2,300 milligrams per day, per person, by 2016, down from the current average intake of 3,400 milligrams, which is about double what individuals require.

One teaspoon salt of salt contains about 2,300 milligrams of sodium.

About 80 per cent of Canadians consume more than 2,300 milligrams of sodium each day, but the rates of high sodium intakes for children are even higher, Health Canada says. Among kids aged four to eight years, the rate of excessive intake is 93 per cent and among teenage boys, it’s 97 per cent.

Although sodium is an essential nutrient, too much of it can lead to high blood pressure, a major risk factor for stroke, heart disease and kidney disease.

More than 75 per cent of the sodium consumed by Canadians comes form processed food.

Health Canada says for most food categories, manufacturers did not do enough to reduce the sodium levels in the foods that they sell to Canadians. The agency says it “consulted extensively” with the food industry between 2009 and 2012 in order to develop its targets. 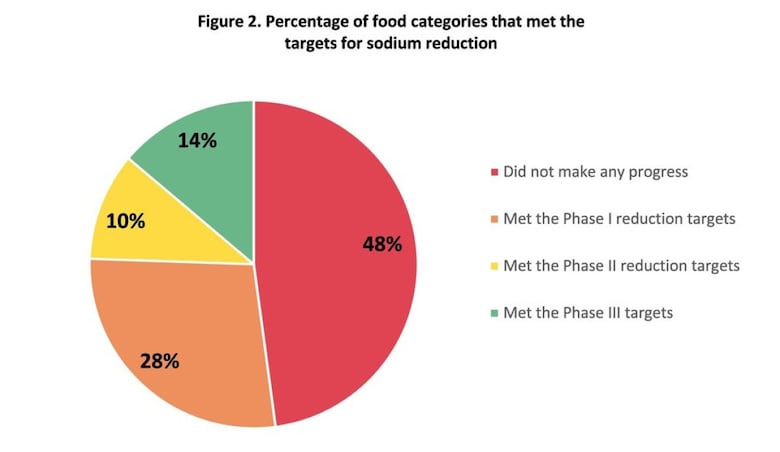 Dr. Norm Campbell with the University of Calgary’s Libin Cardiovascular Institute of Alberta, who’s a leading expert in hypertension prevention, was part of the Health Canada Sodium Working Group established in late 2007, which made recommendations in 2010 for lowering sodium in processed foods.

He told CBC News that recent data in Canada indicates about one-third of hypertension cases can be explained by high dietary sodium.

Sodium in food blamed for hypertension

“So about 2.5 million Canadians have hypertension because of the sodium put in our food. The personal and societal costs are very high,” he said.

As for what’s next, Campbell said it will be important for the government to indicate “the strong need for industry to meet the targets.”

He said this was done by the current government with Prime Minister Justin Trudeau’s mandate letter to the minister of health last October, in which he urged bringing in tougher regulations to eliminate trans fats and to reduce salt in processed foods.