Fruit and vegetable waste from farms ‘could feed population of Birmingham or Manchester for a year’, says environmental charity

Fruit and vegetable waste from farms ‘could feed population of Birmingham or Manchester for a year’, says environmental charity

A new report has revealed the staggering levels of food waste coming from farms in the UK.

Research carried out by the food and environment charity Feedback has examined the role supermarkets play in driving the overproduction and subsequent waste of food on farms.

As supermarkets have over 85 per cent of the market share of grocery stores, the report warned they have the power to burden farmers both with food waste and the associated costs.

Fruit and vegetable farmers responding to a Feedback survey reported they wasted up to 37,000 tonnes of produce every year – around 16 per cent of their crop.

This quantity would be enough to provide 250,000 people with their recommended five portions of fruit and vegetables a day for a year. 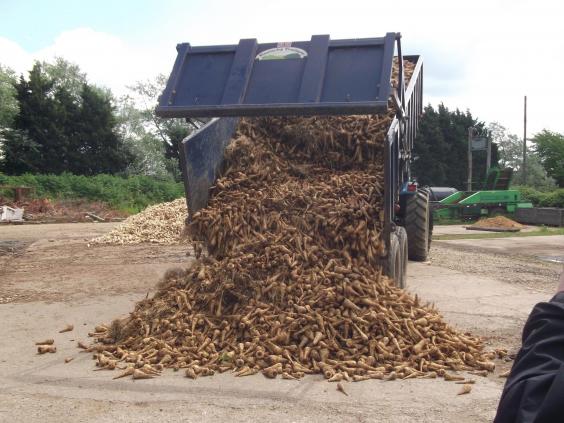 Farmers approached by Feedback said they wasted between 22,000 and 37,000 tonnes of fruit and vegetables, including these parsnips, every year (Feedback)

Based on a rough extrapolation from these figures, Feedback estimated the overall quantity of wasted produce could keep cities the size of Birmingham or Manchester adequately supplied with fruit and vegetables.

“It is extraordinary that we are still getting to grips with how we waste food throughout the supply chain,” said Peter Griffith, director of Farming Online, which partnered in the research.

“Not only that, but it is also wasting the resources that have gone into producing that food.”

“Despite a government and industry focus on food waste occurring in homes, our pioneering research finds that waste on farms, often a result of supermarkets’ outsized power in the supply chain, is significant and pervasive,” said Carina Millstone, executive director of Feedback.

“Supermarkets need to recognise their part in driving food waste on the farms in their supply chain – and work with their suppliers to reduce this waste.”

The report describes food waste as an “ecological catastrophe of staggering proportion”, and particularly highlights the ways in which supermarkets contribute to this.

While some supermarkets have made public commitments to reducing food waste, the report concludes these measures have had little impact. In particular it notes that the inflexibility of supermarket contracts has “normalised overproduction and the resulting waste”.

Over half the farmers surveyed agreed they were forced to overproduce because there is pressure to always meet buyer orders, or risk losing contracts.

Produce being rejected for cosmetic reasons such as colour, shape and size was the major reason for food waste identified by farmers involved in the study.

While consumers can undoubtedly be fussy when choosing their food, the report suggests consumer fussiness is being driven by the supermarkets themselves. Moreover, the takeover of the market by major supermarkets appears to have left fewer outlets to sell “imperfect” produce.

Nearly half those surveyed said retailers use cosmetic standards as an excuse to reject produce when they can get a lower price elsewhere, or else following a fall in demand.

“We would like to see retailers relaxing their cosmetic standards to ensure diversity of shapes and sizes – factors that don’t affect the taste or quality at all,” Martin Bowman, the author of the Feedback report  told The Independent.

“We also want to ensure that farmers get paid a fair price for that.”

The report – a pilot study ahead of the food charity WRAP releasing more comprehensive figures – reveals the scale of waste from farms.

“Farmers surveyed for our research reported an average 10-16 per cent food wastage in typical years, equal to around 22,000 to 37,000 tonnes: enough food to provide 150,000 to 250,000 people with five portions of fruit and vegetables a day for a whole year, about the same as the whole population of Wolverhampton,” said Mr Bowman.

“Our surveyed farmers grew about 2.6 per cent of the fruit, vegetables and potatoes grown in the UK – based on rough and ready extrapolations from this small sample size, we estimate that 2-4 million people could be fed their 5 a day nationally on fruit and veg wasted on UK farms, equal to more than the population of Birmingham or Manchester.”

However, Mr Bowman noted this is a very rough estimate. “We desperately need the UK to gather better data to shine a light on food waste on farms,” he said.

“This report reveals that the problem is huge, and supermarkets play a strong role in causing the problem.”

He said there have been encouraging steps in the right direction with supermarkets such as Tesco launching “wonky fruit and veg” ranges in recent years.

A Tesco spokesperson said: “Our aim is to take as much of the edible crop from our growers and producers as possible, in order to provide customers with affordable, quality fresh produce year round.

“Our Farm Brands and Perfectly Imperfect ranges allow us to do this by capturing parts of the crop which previously fell outside our specifications.”

However, Mr Bowman said supermarkets were still failing to tackle the core of the problem and there is a need to sell more of this produce at a fair price for farmers.

At the moment commitments to cut down on food waste do not include farms, meaning supermarkets are only held accountable for waste that occurs in their stores.

Feedback has recommended that the Government adopts a national target to halve UK food waste “from farm to fork” by 2030.

The Department for Environment, Food and Rural Affairs had not responded to a request for comment at the time of publication.

Buy This: 3 drinks to keep you hydrated and healthy

Buy This: 3 drinks to keep you hydrated and healthy