Gopan Gopalan worked as a computer engineer for eight years in Bengaluru before starting his food truck Dakshinn. “I travelled to around 22 countries as a part of my job, and was inspired by the concept of food trucks I saw there, especially in the U.S.”

Gopalan, who loves to cook and experiment with food, quit his job to start a food truck in Coimbatore that specialises in South Indian food. “After moving here, I studied the market and then bought a Tata 407. I got the vehicle customised at a workshop in Kuniamuthur. I chose Coimbatore because the traffic is not as bad as Bangalore, and it is also close to my home-town, Palakkad.”

His truck is certified by the Food Safety and Standards Authority of India and launched two months ago at Vilankurichi. “ It’s an ideal place for the truck. It is not too crowded, and is also near the Tidel Park”. He brought in two cooks, who worked in Kerala, to prepare the food.

There are plans to start home delivery, take catering orders for parties, and open more branches in the city. Gopan says, he ensures that there is no wastage of food.

“We make only limited quantities. But, our customer number is growing by word of mouth publicity.” 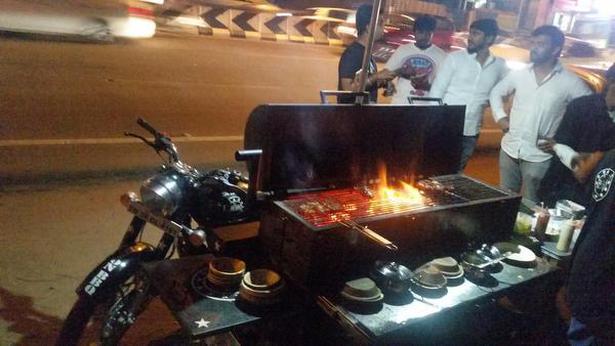 Last month, BBQ Ride India opened its first franchise in Coimbatore. Nivedha S, the franchisee owner says, “I wanted to be in the food industry. I first read about the BBQ Ride India online and then travelled to Chennai to get a taste of the experience. The chicken wings and burger served there was so good that I immediately approached Arun Varma, the founder, to start one in Coimbatore. This is the 23rd outlet of the franchise.” The menu offers a plenty of vegetarian options like grilled pineapple, capsicum, paneer, baby corn, mushroom, and chicken wings, chicken drumsticks, fish and more. The barbeque grill box is set up a bike. It is modified at a warehouse in Bangalore. There are provisions to store food, charcoal and the umbrella. There are three chefs at work. “They were trained in Chennai for 45 days. The marination masala is a secret recipe of the brand. Quail and prawns will be added to the menu shortly,” she says.

The preparations for the day starts at 11.00 am. “ We buy everything fresh from the local market. After marination, the meat has to be grilled right to get the taste.”

Nivedha posted info about the launch on Facebook and the response has been great. “ We ran out of stock in two hours on day one,” smiles Nivedha

She now plans to also set up the bike at Saravanampatti and Brookefields Mall. 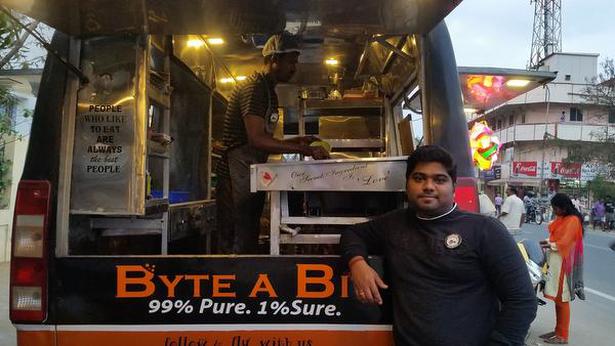 A brightly-lit red truck is parked by the roadside. A board lists the menu on offer that includes popcorn chicken, kothu kozhi, soya manchurian, potato balls, chicken kothu porotta…. and Saju R (27) who owns the Byte a Bit food truck is busy posing for a photoshoot. “ A lot of people come and click a selfie in front of the truck. They are eager to know more. They see the truck and then drop by to see what we offer,” says Saju.

Saju worked in an IT company in Bengaluru before he started the truck. “I am basically a foodie. I learnt about the food truck culture there and visited them often. Then, I decided to start one in my hometown Coimbatore.” To start with, he bought a second hand Force traveller vehicle and customised it. “It took me almost eight months. We launched the food truck at Codissia a few months ago,”says Saju. A number of college students turned up and the response was so good that they almost ran out of food in an hour!

Later, the truck was stationed at Hindusthan College of Arts & Science for two months. “But, we wanted to be visible. So, we moved here which is easily accessible for everyone.”

The menu on offer has vegetarian and non-vegetarian dishes. “ One of our signature dishes is Roodles, a combination of rice and noodles. Kothu kozhi is another speciality,” says Saju who also makes it a point to serve food on eco-friendly areca plates.

Byte a Bit also participated in Coimbatore Vizha. “We sold 300 cups of pop-corn chicken in a single day. The response was overwhelming.”

They take party orders for corporate events and parties.