Christmas dinner CAN be stress-free… as long as you start cooking NOW!

Christmas dinner CAN be stress-free… as long as you start cooking NOW!

Need a Thanksgiving cocktail recipe? KC bartenders share some, from sweet to bitter

Christmas dinner and all the trimmings can be more of an ordeal than a celebration for the cook.

The first time I attempted to make it, I was so exhausted by the time I’d finally served the food that I actually fell asleep at the table.

‘The trouble with Christmas dinner is that, quite often, it’s the only meal people cook from scratch all year,’ explains chef Gordon McDermott. ‘And it’s quite a complicated and expensive one. It’s no wonder people get stressed out.’

Gordon hopes to change all that. He is head chef at the new Waitrose Cookery School, where I have come to learn the secrets of a relaxed Christmas dinner. The state-of-the-art school on London’s Finchley Road is the pet project of managing director Mark Price.

‘He’s spent a lot of time stocking the stores with really good cooks’ ingredients,’ says Gordon. ‘Now he wants to teach people how to use them.’

The white kitchen is kitted out with the latest kitchen equipment and so pristine that I’m almost scared to set foot in it. Fortunately, Gordon, who used to run Rick Stein’s cookery school in Padstow, is friendly, softly spoken, and almost immediately burns a pan of cashew nuts  –  purely, I suspect, to put me at my ease.

‘Christmas Day should be relaxed and fun, for the cook as well as everyone else,’ he explains.

‘But it’s hard to make a good Christmas dinner in a typical family kitchen. You really need several ovens. For instance, you shouldn’t cook your turkey and your potatoes together because the potatoes need to be crisp and the steam the turkey gives off makes them soggy.

‘And if you’ve only got four rings on your hob, it’s going to be very difficult cooking the gravy, sauces and all the veg at the same time.’

Gordon’s technique is to copy the restaurant chefs and make most of Christmas dinner not just hours but weeks ahead of time. ‘On the day, all you should really have to think about is the turkey and the potatoes,’ he says.

We start off with the red cabbage. I have to slice it finely (not a job you want to do in a hurry on Christmas morning, unless you want to chop off a finger).

This is cooked up with onion, butter, apple, spices, vinegar and sugar and left to simmer on the hob for an hour. When it’s cooled, Gordon puts it into a large Kilner jar.

‘This goes into the fridge and will keep for more than a week,’ he says. ‘In fact, it tastes better if you make it ahead of time because the flavours have time to develop. On the day itself, all you have to do is put it in a bowl and heat it in the microwave.’ I make a note in my diary for 18 December.

Next come the parsnips, carrots and Brussels sprouts, which all need peeling and chopping. Gordon doesn’t bother cutting crosses at the bottom of the sprouts but chops them in half. Then we blanch everything.

The carrots and parsnips get 12 minutes, the sprouts about eight in boiling water. Then everything is dropped into iced water to stop the cooking process, drained and dried with kitchen paper and shoved into the fridge under clingfilm.

‘You could do this up to three days in advance,’ says Gordon. But won’t they taste a bit tired on the day? ‘Not at all,’ he reassures me, ‘because you will actually be pan-frying them on Christmas Day, so they’ll taste really fresh.’

On to the sauces. Bread sauce is yet another ingredient that benefits from being made early, it seems.

And it’s soothing making it in the serene atmosphere of this silent, all-white kitchen rather than whisking away frantically at my own stove, with the oven reeking of turkey fat and the children pulling crackers behind me.

I chop an onion, add the cloves, bay leaves, milk and butter, and leave the bay leaf to add its scent to the mixture. Then we add fresh breadcrumbs and cream, and grate in the nutmeg.

The result is wonderfully creamy and aromatic but, more important, it will keep in the fridge for a week, or the freezer for up to three months.

By now, so many of the fiddly elements of Christmas dinner appear to have been taken care of that I’m ready to contemplate making cranberry sauce. Until now it has always been out of a jar. But Gordon has more ambitious ideas.

‘Let’s do mixed berries instead,’ he suggests. So we get a 300g (10½oz) pack of mixed frozen berries from the store downstairs (all the ingredients used on the courses are available from Waitrose). This is not the sort of inventive cooking I’d be prepared to attempt on the big day, but, hey, it’s November…

The berries are simmered for ten minutes. Then we add 100g (3½oz) sugar, a few tablespoons of port and a couple of large pieces of orange peel, and cook for a further ten minutes till the sugar has dissolved and the sauce has thickened.

This would also make a brilliant present,’ points out Gordon, transferring the sauce to a jar, where it is happy to sit for three months.

I sneak a spoonful  –  it’s delicious: tart yet sweet, obviously homemade and much more interesting than the usual gloopy cranberry gunk.

While we’re at it, we make some brandy butter, roll it into a sausage shape, wrap it in clingfilm and add that to the groaning freezer.

‘This is a great Christmas standby,’ says Gordon. ‘When you serve up mince pies, you can simply slice it in rounds, and put a piece on top, before putting them in the oven to warm up.’

Now for the potatoes. Traditionally, I delegate this job to my husband on Christmas Eve. This year, he can get started weeks ahead of time. Once peeled, we parboil the potatoes for ten minutes, shake them to roughen up the edges, and freeze them on a tray, spaced well apart. Once frozen, they can be put in a plastic bag. Alternatively, they can be peeled on Christmas Eve and left in the fridge in a bowl under a tea towel.

By now, our timetable has taken us up to Christmas Eve. This year, as well as watching the big film, I will be preparing little stuffing parcels: sausagemeat wrapped in bacon, topped with a prune and skewered. We also start on the gravy, making a turkey stock using the turkey’s giblets. 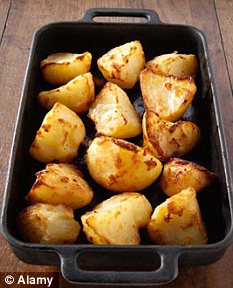 Perfect potatoes: you can peel and parboil your spuds well in advance

So what’s left for the big day? Almost nothing! The turkey preparation involves little more than chopping an onion into four, shoving it inside the turkey with some bay leaves, spreading butter under the bird’s skin, and putting it in the oven covered in foil.

And that’s it for several hours  –  plenty of time to open presents, drink champagne, lay the table and have the first row with your loved ones.

Half an hour before it’s done, remove the foil, lay bacon on the turkey and surround it with the stuffing parcels. Once cooked, take it out of the oven, wrap it in foil and leave it somewhere warm to relax.

Crank up the oven and shove in a pan of goose fat for the potatoes, and another pan for the veg. When the fat is hot, put the potatoes in to crisp up.

Now the parsnips and carrots, mixed in an olive oil, honey and mustard sauce (made the day before), go into the oven with the potatoes for half an hour.

Meanwhile, I whisk up an effortless gravy using the pre-made stock, plus turkey juices, some wine and flour. Then panfry the pre-prepared sprouts with some vacpacked chestnuts and, five minutes before the end, microwave the bread sauce and cabbage.

And the final stress-saving tip? Don’t bother dishing up onto plates. ‘It looks far more festive to put serving dishes on the table, and the food stays warm for longer too,’ says Gordon. The rest is plain sailing, especially as most Christmas puds these days are just as happy with a minute’s microwaving as several hours of steam.

After facing the biggest culinary trial of the year, I feel not only relaxed but triumphant. You can certainly take the chaos out of Christmas, especially if you’re prepared to start cooking in November.

Now, if I can just get on Waitrose’s Christmas Leftovers course to find out what to do with the cold turkey, I’ll have the seasonal catering all wrapped up.