Ulises Martinez didn’t grow up drinking mezcal, but as the beverage director of Mi Tocaya Antojeria, he’s learned the ways of the Mexican spirit. Martinez, 29, grew up in Chicago and only recently unveiled his drink menu at Mi Tocaya, the acclaimed Mexican restaurant in Logan Square from chef/owner Diana Dávila. He took over for Matt Frederick who created the opening drink list and has gone on to become general manager at the Maplewood Tap.

Frederick said he urged Martinez to take a larger role at the restaurant for months. Martinez actually joined Mi Tocaya in Februrary 2017 and learned the ways of mezcal. Despite the Mexican heritage, bourbon is his spirit of choice. Finally, in September, Martinez accepted the beverage director’s job. Even after that, he kept Frederick’s drink list until recently.

Before Mi Tocaya, Martinez worked at McDonald’s, bars, and coffeeshops. It’s been quite a journey for him: Martinez and his mother, Olivia Rojas, entered the country illegally when Martinez was 6. He is part of a restaurant industry full of DREAMers, a recipient of the Deferred Action for Childhood Arrivals law.

President Barack Obama started DACA in 2012 as a way to protect unauthorized immigrants who arrived in the U.S. as children from deportation. It allows them to obtain a driver’s license to pursue employment. Martinez and other beneficiaries have been dubbed “DREAMers.” Some may face deportation if the federal government repeals the law. Martinez received his work permit five years ago.

“Besides my skin color, my features, you would never know I come from Mexico,” Martinez said. “You would never assume that I wasn’t born here, you know?”

Knowing the struggle, Martinez, along with other DREAMers have partnered with El Silencio Mezcal. They’re hosting a fundraiser on Monday night at The Barrelhouse Flat in Lincoln Park. DREAMers, including Martinez, will bartend the event. All proceeds will go toward benefitting DACA applicants.

There’s irony that even though Martinez was born in Mexico in 1989, he can’t visit. Customs would never let him back in America. That means when his industry colleagues are taking trips to discover the origins of mezcal, he can’t join them.

Martinez doesn’t speak with an accent. He’s a Green Bay Packers and Chicago White Sox fan. He graduated from Bogan High School on the South Side. He enjoys music and goes to events like Riot Fest. Martinez even wanted to serve in the military, but the Army and Marines rejected him. He’s not afraid that a higher profile will make him more vulnerable to ICE agents. He feels the responsibility to stand up against the current anti-immigrant tide.

“I have all my paperwork in order, I’ve paid my taxes,” Martinez said. “There’s no real reason to try and kick me out of the country.”

Martinez is appreciative that he has the opportunity in America but knows the road to legal status is difficult and expensive. An application fee costs $495. Before he received his work permit — he can still remember the date, August 15, 2012 — Martinez waited in line at Navy Pier. There was a public info session for those interested in DACA. He waited 2 1⁄2 hours and moved only 300 feet in line. Martinez remembers the line stretching from Navy Pier’s entrance to Wacker Drive, wrapping around twice. The line was packed with interested peoples from Ohio, Wisconsin, Indiana, and Illinois. Instead he went home with his friends, researched the process and filed the application himself. When he finally received the permit, he “fell to the ground, I couldn’t believe this is so cool.”

When Dávila and Frederick interviewed Martinez for the job, he wanted to stress his loyalty. He remains committed to his workplace almost as strong as he’s committed to America.

Take a look at the fundraiser’s menu below. 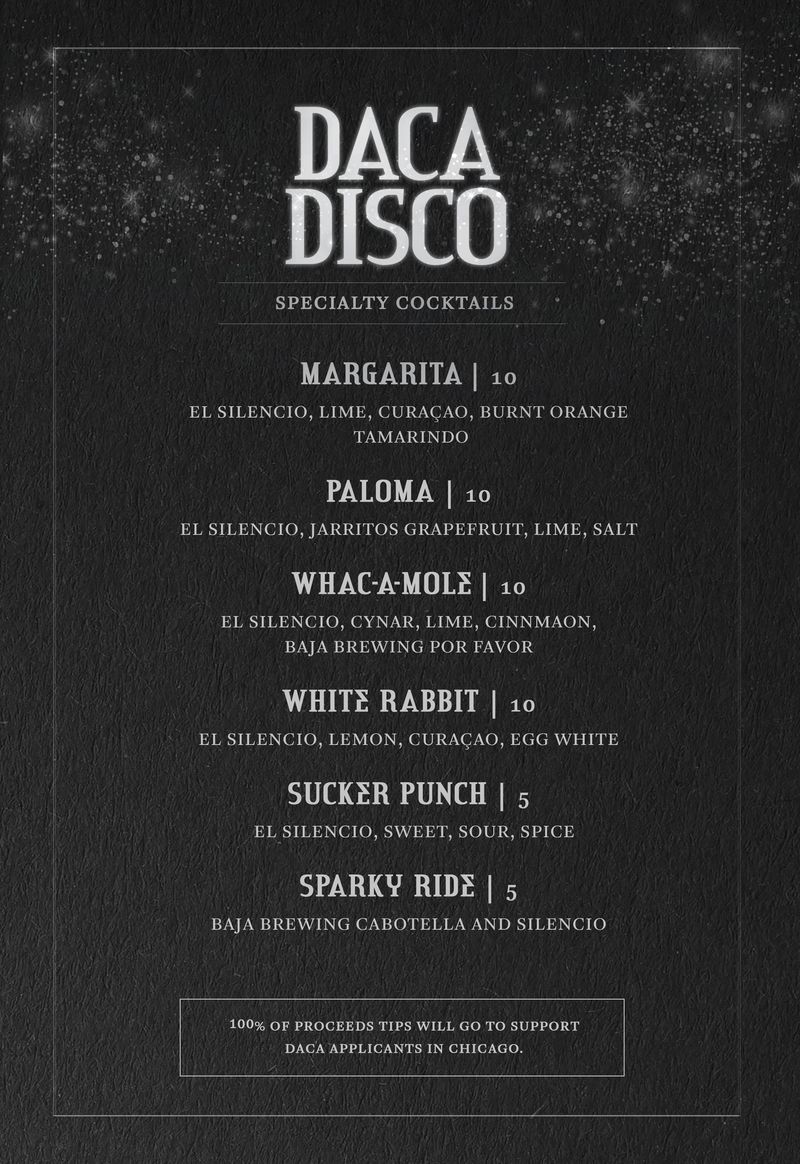